We’ve had snow on the ground since December, January’s snow fall was light but February is turning out to have record snowfall. We had a 16 inch dump recently on top of our 12 inches and we are having a real winter. All in all our snow pack is at 115% of normal currently so we are looking at another healthy flow year on the Kootenai. The Yaak and the Bull rivers will be floatable through most of July, possibly into August.

Montana FWP update from Jared (Greenie) Lampton
He guided for us a number of years until getting a full time position with Montana FWP.

“We conduct annual population estimates in four sections of the river.  Since we do most of the estimates in the fall we’ve found that our ability to predict how the fishing will be the following year is very limited at best.   This is because we don’t know how over-winter survival and spawning stress will impact the population the following year.  However, you might find it useful to know how our most recent estimates stack up to 5-10 year averages. 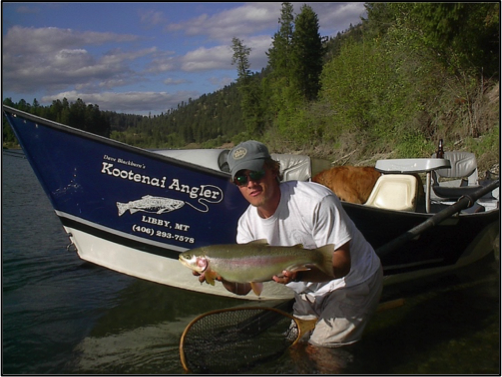 Our fall of 2016 estimate at the dam was 2276 rainbows per mile which is about the same as 2015 but about 25% lower than the 5-year average.   Also, the proportion of fish over 12 inches was the lowest we’ve seen in the past 5 years. However, redd counts and catch of rainbow trout fry have been up the last two years. The Dam section has held a relatively high total abundance and proportion of larger fish from 2012 to 2015.  It will be interesting in the future to see if the 2016 numbers are the beginning of a downward trend or if increased spawning success will help prevent that.

According to our estimates, the Re-reg section has had relatively high total abundance and proportion of fish over 12 inches in 2014-2016.  At this point, we don’t have any reason to suspect a drastic change in 2017.
In the Flower-Pipe section, downstream of Libby, we estimated about 1800 trout per mile in fall of 2016 which is only 63% of the 10-year average.  This is the lowest estimate since 2010.  The decline in numbers was spread across all size classes of fish.  The Flower-Pipe section is our longest running data set and our numbers show that total abundance of fish can vary wildly in short periods of time.

Our creel studies and anecdotal reports indicate that anglers have enjoyed good fishing on the Kootenai during the past 3 years or so, but those reports became more mixed during the end of the 2016 fishing season. At this point, we don’t have good reason to believe that is going to change drastically within the next year.”