Fishing Report: There are hoppers-a-plenty, and our local trout population has taken notice! Now’s the time to get out there and throw some big ol’ bugs, and if you play your cards right, you just might get some big ol’ eats! Get those presentations tight to the bank, especially when the tall grass comes right down to the water’s edge. Also be looking for fish in the knee-deep riffles, tucked in behind boulders, and lurking along the shelves and drop-offs.

We’re still seeing good hatches of PMD’s in the later part of the mornings, as well as during the evening hours. BWO action is also starting to pick up with the cooler temps and cloudy days. Be on the lookout for tiny flying black ants. If they’re on the water, fish can get pretty keyed on these little guys. Crane Flies can also produce some hot fishing during this time of year. These bugs are best fished tight to the rip-rap, and don’t be afraid to put a little action on them. Give ’em the twitch!

Bottom Line: Get out there and throw some big bugs! 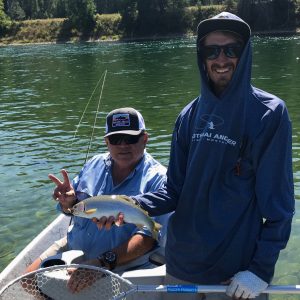